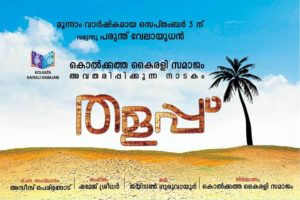 Team KKS presented their fourth drama “Thalappu” – malayalam drama written and directed by Aziz Peringode, a well-known actor as well. This was  drama set in the village environment of Kerala, staged as part of the 3rd Anniversary of KKS and Onam celebrations on 3rd August, 2017 at Sarad Sadan, Behala, Kolkata. 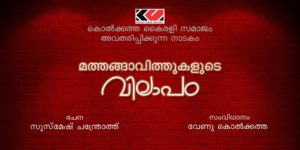 The third drama from KKS, staged on 14th February, 2016 was titled “Mathangavithukalude Vilaapam” written by Susmesh Chandroth. The theme of the drama was the impact of war on human lives. 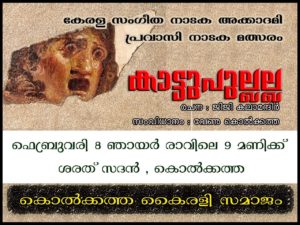 After the success of “Pulippennu”, the second drama from KKS was also penned by Jiji Kalamandir and directed by Venu Kolkata – “Kaattupullalla”. This was staged on February 8, 2015.  The drama was an effort to link the Mahabharat with the contemporary realities. 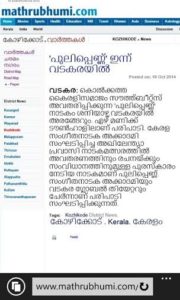 This drama was staged in the first year, in 2014. This was a joint effort of the malayalee community in Kolkata and KKS members. The drama was written by Jiji Kalamandir and directed by Rajesh. This drama bagged 5 state awards and was staged across Kerala from Thiruvananthapuram to Kasargode in 9 places and was widely acclaimed.