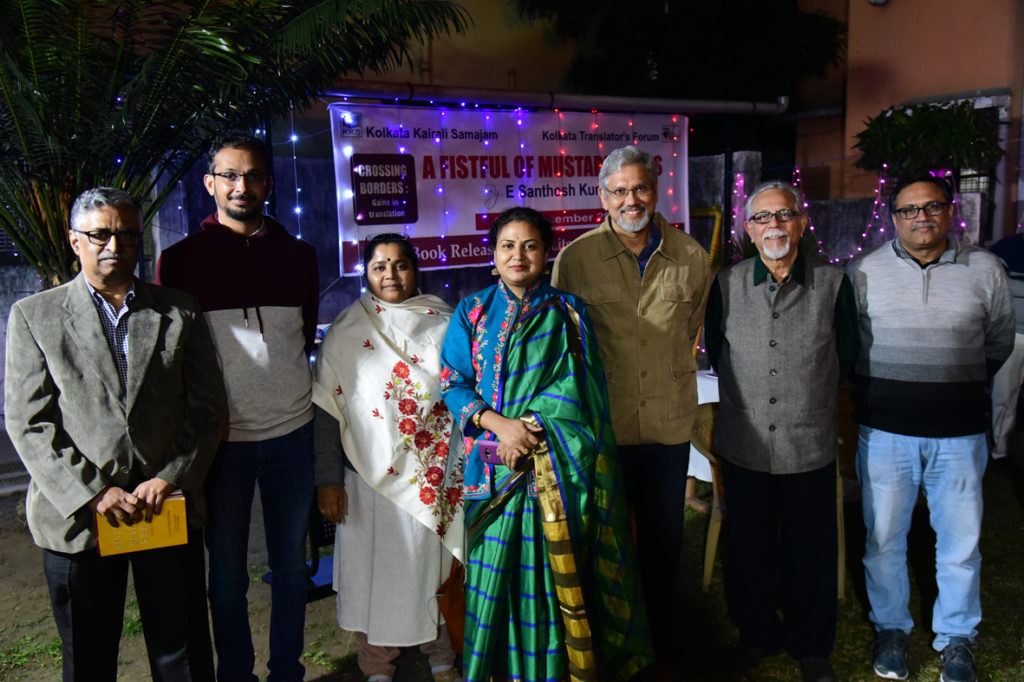 Kolkata Kairali Samajam, in association with Kolkata Translators Forum, organized the release of the book “A fistful of Mustard Seeds” – a collection of short stories by Sahitya Akademi awarded writer E Santosh Kumar, translated from Malayalam by P N Venugopal and published by Niyogi Books, Delhi.. The book was released by noted Bengali writer Trishna Basak by handing over a copy to Writer and Film Critic Amitava Nag.

A Literary Seminar, with the the central theme as “Crossing Borders: Gains in Translation” was organized along with the Book Release.

Sreekumar V, Jt.Secretary, Kolkata Kairali Samajam, who welcomed the guests, touched upon the various events organized by KKS towards bridging the cultural divide between various geographies in India, specifically Malayalam and Bengali Literature.

Here is the gist of the speeches by the guests during the event:

A translator of literature has to be aware of the culture and thought process of the target language. Otherwise he/she is a failure. In a multilingual country like India, the translator plays the role of a panda in a temple who helps the language pilgrim to reach the God of literature. In Santosh Kumar’s story there is a subdued violence under serenity of the surface. He uses imagery which reminds me of the poems of Jibanananda Das.

Amitava Nag: “Remake or dubbing – Options of Translation in Cinema”

In Early cinema, during the age of Silent films the audience never had any problems in understanding the narrative though there may be problems in identification due to cultural differences. With the advent of talkies in the 1930s questions of understanding the language of dialogues came into picture. But we need to essentially understand that fundamentally Literature and Cinema are two distinctively different mediums with different characteristics, constrains and liberties. While Literature communicates through narrations in text and dialogues of characters, Cinema depends on Visual mis-en-scene (Setting, background) and dialogues of characters to communicate.

There can be 3 approaches of translation in cinema:

Like a literary translator, here also it is not only sufficient to just have a command of both languages, but also to explore and study history as well as the cultural and social references of both the languages. So, what is better than just translating dialogues for dubbing or for using in subtitles is REMAKE

In most of the finest films in the history of cinema, it’s the visual image that ‘speaks’ in an universal language more than the dialogues of the characters in them.

While introducing the author, A Chattopadhyay pointed out that stories by Santosh deals with the inner world of the character.

E Santosh Kumar: “Me and My Works”

For me it looks like a dream that my book gets released and discussed in Kolkata, because we grew up reading Bengali literature in translation, watching Bengali films and art.

Translation, however great it is, cannot bring the complete meaning from the originals. So it is approximation at best. But even then, in a diverse society when people are divided based on religion, caste, nationalities and colour etc., translation unifies.

Writing is a demanding job. The themes come to us as a visual, sentence, something incomprehensible, at first. Then we store it in the corner of our mind. This is a dormant phase. Later when time ripens, the theme may get developed into a full fledged story. In that process, it undergoes a series of changes, may become unrecognizable from what we had conceived initially.

My basic theme in writing is: how we can communicate with others? Is our language sufficient ? Do other people understand what we speak; in the way we meant? I tried to experiment this idea in many of my works; like “Three Blindmen Describe an Elephant “, “Dance of Peacocks”, “Three Fingers” etc.

The event concluded with a story reading session by E Santosh Kumar, followed by an interactive session with the audience.

Mrs. Jaya Kundu, of Kolkata Translators Forum proposed the vote of thanks.